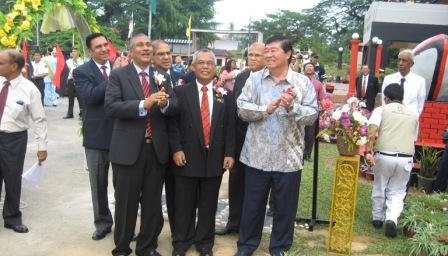 TAIPING: Some of them are corporate figures and politicians, a few are top brass in the armed and police forces while others have proven themselves as sportsmen. Their backgrounds may be diverse, but they have now come together to honour and glorify their alma mater: King Edward VII School. In conjunction with the school's 125th anniversary this year, these men plan to raise RM1 million for it. It is intended for present and future Edwardians, so they may carry on the tradition of winning for their school. The old Edwardians, with Tun Dr Ling Liong Sik as patron, are organising a charity grand dinner and will publish a coffee-table book to raise the money. Speaking after the launching of the 125th King Edward VII School Anniversary here yesterday, organising committee chairman Datuk Seri Dr Abdul Shukor Abdullah said it was time that the school had its own trust fund.

"Many distinguished schools in our country such as the Victoria Institution have their own trust funds to sponsor extra-curricular activities to boost their standing, glory and honour. Similarly, the old boys' association has decided that the time is right to set up such a fund to sponsor sports activities and for the school band. We will get the old Edwardians to contribute to this fund."

The 125th anniversary was launched by Dr Ling, an old Edwardian and the only Edwardian to have been bestowed with the title Tun. Abdul Shukor said the dinner was expected to be held in August while the coffee-table book, co-ordinated by Media Prima chairman Datuk Abdul Mutalib Razak, would be published beforehand to be sold to the old boys. Abdul Mutalib said the book was nearing completion and that only 3,000 copies would be printed, adding that the price per copy had not yet been determined. "The book will contain the school's history, biodata of headmasters and principals, stories of outstanding Edwardians and scholarly articles reprinted from the school's old magazines," he said.

Among the personalities who studied at the school were Sultan Iskandar Shah and Sultan Abdul Aziz Almustasim Billah Shah, the 30th and 31st rulers of Perak; and Yusof Ishak, who was the first president of Singapore. The Raja Permaisuri of Perak Tuanku Bainun was once on a teaching stint at the school. Meanwhile, Mohaideen Mohd Ishack, president of the Old Edwardian Association Malaysia, said a museum displaying achievements of the old Edwardians would be set up to motivate present-day students to excel in all fields.